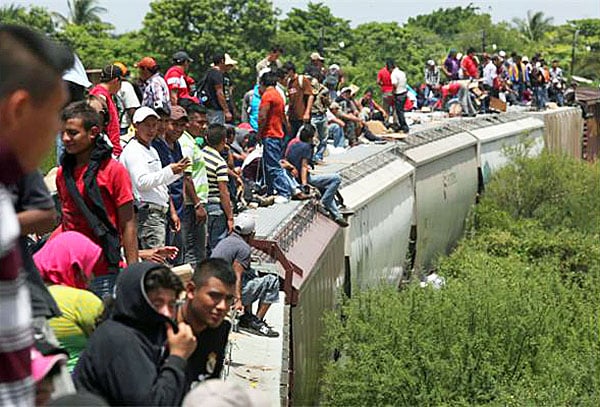 Children ride atop the “Beast” for a train ride to the border and an eventual entry into the U.S.

Abbott visited the Kay Bailey Hutchison Convention Center in Dallas, Texas, where thousands of migrant teenagers will be held temporarily beginning this week, The Dallas Morning News reported. Abbott said he plans to investigate whether the migrants traveling to the border are brought through human trafficking and described the situation at the southern border as a crisis.

“I urge President Biden: Do not traumatize these children by enticing them to make this trek,” Abbott said, The Dallas Morning News reported. “The Biden administration opened the floodgates … They were completely unprepared for this.”

“We have an obligation to pursue all crimes against children” DPS director McCraw says. Challenge is IDing indicators of abuse/trafficking/etc. Important to pursue those things to ensure no crimes committed.#txlege

Abbott said he wants to discuss human trafficking with the teenagers, The Dallas Morning News reported. He accused the Biden administration of “enticing” migrants to travel to the U.S. where minors could be vulnerable to “traffickers, to abuse and to terror.”

“America needs to know how these children — some are you

Report: Trump Wants To “Wreck Fox News” – So Donald Is...

admin - December 26, 2020 0
President Donald Trump still refuses to concede the 2020 election, and he fully intends to contest the results. Lawsuits have been leveled and investigations...

UNREAL: Nancy Pelosi Says Biden Has The Situation At The Border...

Nearly 200,000 Counterfeit Masks From China Seized By US Officials.