Democrats dragged him in front of Congress again – but now they’re regretting it.

Attorney General Barr reported to Capitol Hill this morning. Democrats thought they were going to grill him.

Instead, he grilled them.

Weeks ago, Barr released his summary of the Mueller Report, then a redacted version of the actual report.

Democrats didn’t get the results they wanted, so they are trying to discredit the AG in front of the public.

But things are going to get even worse for the left. Why? Because Barr is dropping the hammer on the “Summer of ’16” gang. 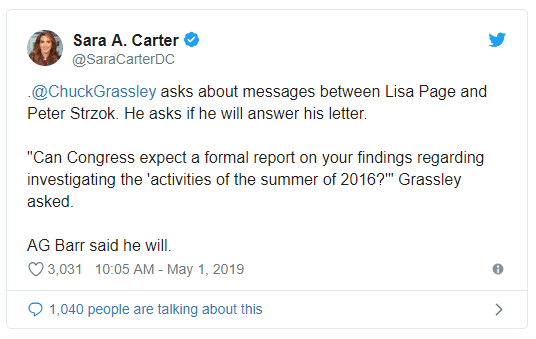 AG Barr confirmed to Chuck Grassley that he is investigating Peter Strzok and Lisa Page. You might remember these two love birds who infamously texted about an “insurance plan” to keep Donald Trump out of office

Eric Swalwell Refuses to Give Up, Sues Trump for Jan. 6 Capitol Riot

How Trump Is Cementing the MAGA Coalition Control of Republican Party

VIDEO: Is China Run By Gangsters?

CD Media Staff - January 19, 2021 0
Is China run by the mafia? That’s according to Elmer Yuen, a Hong Kong politician and activist, who is lobbying the US government to...

Russia: 7 Die in Fire at Nursing Home in Western Siberia

Here are 7 signs you’re AGING faster than you should be...